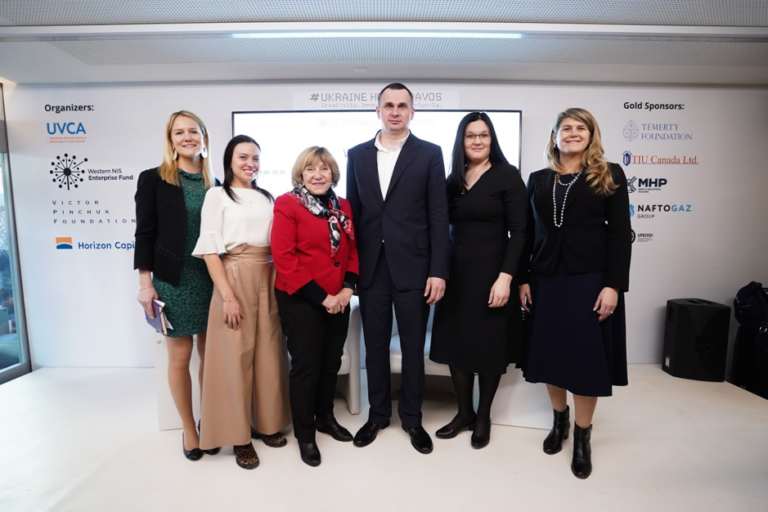 Highlights of Ukraine House Davos included the visit of the President of Ukraine Volodymyr Zelensky who acknowledged the UHOC for their efforts in promoting Ukraine. Prime Minister of Ukraine Oleksii Honcharuk chaired an invitation-only meeting of the National Investment Council of Ukraine, where the Ministry of Infrastructure of Ukraine and Germany’s largest railway operator, Deutsche Bahn signed a Memorandum of Understanding on the cooperation and development of Ukrzaliznytsia. Top government officials who spoke on panels during the week included David Arakhamia, Secretary of the National Investment Council of Ukraine, Member of Parliament; Yuliya Kovaliv, Deputy Head of the Office of the President of Ukraine; Vladyslav Kryklii, Minister of Infrastructure of Ukraine; Oleksandr Bornyakov, Deputy Minister of Digital Transformation of Ukraine; Dmytro Sennychenko, Head of the State Property Fund of Ukraine; Members of Parliament Kira Rudik and Solomiia Bobrovska; Olga Magaletska, Head of the Office of the National Investment Council of Ukraine, and Daniel Bilak, Member of Supervisory Board, UkraineInvest. Finance Minister of Ukraine Oksana Markarova, Minister of Economic Development, Trade and Agriculture of Ukraine Tymofii Mylovanov, Oksana Nechyporenko, Chair of Supervisory Board, UkraineInvest, Chief Advisor to the Prime Minister of Ukraine, and many esteemed MPs participated in events.

Ukraine House Davos 2020 surpassed the success of last year’s event, strengthening the image of Ukraine as a modern, European country offering a wealth of opportunities. Ukraine House Davos hosted sixteen engaging panels on investment, infrastructure, IT and education, as well as evening receptions and cultural diplomacy events featuring top Ukrainian CEOs and leaders, as well as notable international speakers including:

“This year, the House exceeded our expectations and reached new heights” said Jaroslawa Johnson, President and CEO of WNISEF. “From world-renowned speakers, such as Amy Bernstein of Harvard Business Review and Daniel Gilbert, Professor of Psychology at Harvard University, Best-Selling Author, to thousands of international guests, potential investors, and new friends of Ukraine, the House is now a landmark platform, and well-known brand in Davos.

Evaluating the results and impact of Ukraine House Davos, Svitlana Grytsenko of Victor Pinchuk Foundation said: “I truly believe that strong partnership is a key to success and long-lasting sustainability of every project. For the third consecutive year, UVCA, WNISEF, Victor Pinchuk Foundation, and Horizon Capital joined efforts, and the results speak for themselves. We managed to attract 13 sponsors, which is more than ever before; our venue this year was 10 times larger compared to the first year, allowing to host the largest number of guests to date. Moreover, we’ve already seen increased interest among new potential sponsors in joining this successful project.”

Olga Afanasyeva, Executive Director of UVCA, underlined the goal of Ukraine House Davos: “The House is an outstanding opportunity to showcase to global business leaders that Ukraine is a hub for IT, infrastructure, and agriculture.  Today, the Ukrainian tech sector boasts the largest financial round in Ukraine’s history (Gitlab), topped by the emergence of a new unicorn (Grammarly), and the advances of other innovative startups and established product platforms, including Petcube, BetterMe and Ajax Systems. All that said, the best time to invest in Ukraine is Now.”

“Ukraine’s President chose Davos to announce bold new initiatives to further attract foreign direct investment to Ukraine, including an international court of arbitration in Ukraine, tax and other incentives for investors and personal attention by dedicated personnel to guide investors through market entry to project execution.  Based on the recently introduced concession law, two port concession tenders have been won – by Swiss-Georgian and Qatari investors.  A window has opened that will be closed in the near term once the 30-35-year concessions are awarded, and marketing of assets slated for large-scale privatization has also begun. Many export-oriented companies, particularly in IT, food and agro, light manufacturing, e-commerce, pharma and healthcare are delivering 20-50% top-line growth per year,” – emphasized Lenna Koszarny, Founding Partner and CEO of Horizon Capital. “Ukraine House Davos has put a spotlight on investment opportunities that are powered by the new generation, especially the $4.5 billion IT industry, and much more”.

Speaking about future plans, Alexa Chopivsky, Executive Director of Ukraine House Davos, said: “Our ability to deliver at such a high level is only made possible by the commitment and financial support of our Gold Sponsors: Temerty Foundation, TIU Canada, MHP, Naftogaz/UFEOGI; and, of our dedicated Panel Sponsors: CEO Club Ukraine, EBS, First Generation Capital Inc, Hillmont Partners, IT Ukraine Association, UNIT.City, and Bohdan Hawrylyshyn Family Foundation. Thank you to Zirkova Vodka, Carlsberg and Oksana Karavanska for hospitality and cultural diplomacy support. Building on this year’s success, Ukraine House Davos will continue its mission of promoting Ukraine in 2021 and will surprise the world with even more opportunities that Ukraine has to offer!”

Follow the event via social media on #ukrainehousedavos and at: